We have entered the Anthropocene, a new geologic epoch characterized by massive and rapid human-caused changes in the global natural systems that are the ultimate determinants of our wellbeing and that underpin our society and economy.

In addition to global warming and climate change, these changes include ocean acidification, unsustainable rates of depletion of both renewable and non-renewable resources, disruption of the nitrogen and phosphorus cycles, widespread pollution of air, water, soils and food chains, and the loss of biodiversity and initiation of a sixth great extinction. 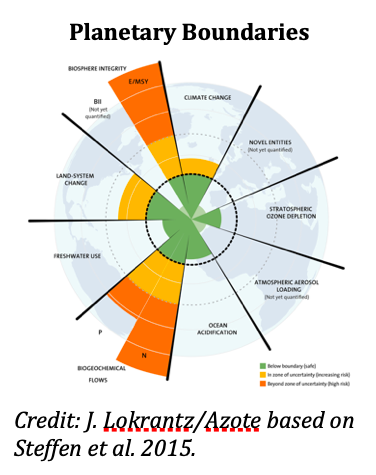 We are crossing planetary boundaries into unsafe areas, threatening to undermine the ecological determinants of our health and wellbeing and perhaps our very existence.

What distinguishes the Anthropocene from previous geologic epochs is that the geological layer being laid down – which reflects the ecological changes underway – is created by us; we are the anthropos (Ancient Greek for human) in the Anthropocene.

But it is not humanity as a whole that is the principal driver of these changes, but a subset of humanity, namely high-income countries and people, and the global corporations that lie at the heart of the global economy. Humans have been responsible for driving most of the ecological changes and damage witnessed over the past couple of hundred years, and all indications are that we will continue to wreak havoc.

For this reason, it is important that high-income countries and communities – such as Greater Victoria – show leadership and action, and make a large effort to rapidly reduce their ecological footprint so as to take only their fair share of the regional resources and one planet’s worth of Earth.